The cornerstone of the Mashriqu’l-Adhkar (House of Worship) of Ishqabad was laid on 26 November, 1902 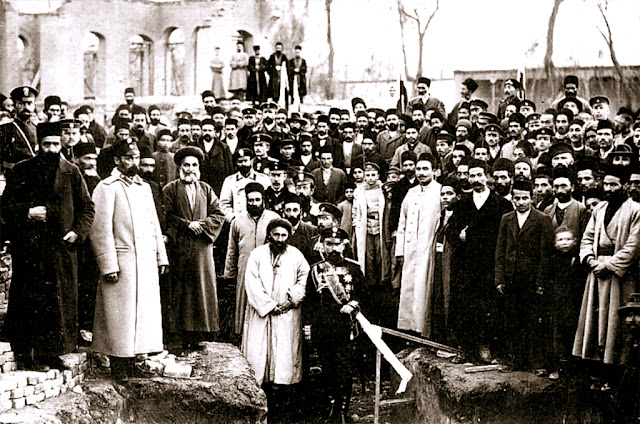 Laying the foundation stone of the Mashriqu'l-Adhkar of Ishqabad. General Krupatkin is at the center front.
November 1902

“O people of the world! Build ye houses of worship throughout the lands in the name of Him Who is the Lord of all religions. Make them as perfect as is possible in the world of being, and adorn them with that which befitteth them, not with images and effigies. Then, with radiance and joy, celebrate therein the praise of your Lord, the Most Compassionate. Verily, by His remembrance the eye is cheered and the heart is filled with light.” (Baha’u’llah, the Kitab-i-Aqdas)

During the lifetime of Baha'u'llah, obeying this command was impossible because the Middle Eastern Baha'is were persecuted. In order to escape oppression, many Persian Baha'is fled north, to the lands that formed part of the Russian Empire. Situated twenty-five miles from the border of Iran was the town of 'Ishqabad, in the modern Turkmenistan. By the turn of the century a large and prosperous Baha'i community had developed there, protected by the tsarist government from persecution. In the autumn of 1902 the 'Ishqabad Baha'is set out to build the first House of Worship in the Baha'i world.

On 28 November 1902 they laid the cornerstone of the building. The 'Ishqabad Baha'is were in regular contact with the Chicago House of spirituality and on 29 November wrote a letter to them, mentioning the event. A second letter with more details followed on 10 December:

“The Governor of this state [General Krupatkin], with a number of Russian officials, came in uniform and with decorations, to congratulate us upon the building of the Mashrak-el-Azcar; and on that day there were also three photographers taking pictures of the assembly, one after another and the Governor built with his own hands, in an appointed place, the date of commencing the Mashrak-el-Azcar in the Russian and Beyan [Baha’i] date, and which is preserved in a silver box. The writers of the newspapers were present...When the Governor had finished his own work, he came to the place reserved for him and [after] they drank tea he spoke for one half hour of what he had learned of this Cause, and … he said: “I am very glad that in my time the Mashrak-el-Azcar of the believers of El-Baha has commenced, and I hope that it will be finished in my epoch, but now because I must depart, I pray you that when it is finished you will send me photograph of it.” … We delivered two addresses in the Persian language on that day, which the Governor asked to have translated into the Russian language and we did so.
(The Baha’i Faith in America, vol. 2, by Robert Stockman)