Professor Edward Granville Browne visited 'Abdu'l-Bahá on December 18th [1912]. It is certain that they had not met during 'Abdu'l-Bahá's previous visit to England. A letter from 'Abdu'l-Bahá to Edward Browne, preserved in Cambridge University Library, provides the definite evidence. [Mahmud] Zarqani's Diary mentions only two meetings during 'Abdu'l-Bahá's second visit to London, whereas Lady Blomfield writes: 'Professor Edward Granville Browne, who had written much concerning the Bábís and the Bahá'ís, came from time to time, speaking in Persian with the Master, Who was delighted to see him, and talked over many things, especially the momentous occasion when that intrepid Cambridge Orientalist succeeded in obtaining permission to enter the presence of Bahá'u'lláh.'
-H.M. Balyuzi  (‘Abdu'l-Baha - The Centre of the Covenant’)

As Mirza Mahmud-i-Zarqani -- 'Abdu'l-Bahá's secretary in the course of His travels, and the chronicler of those memorable years in the West -- has recorded, Browne during his… visit wished to broach the subject of his writings in the past and offer apologies, but 'Abdu'l-Bahá drew away from this topic and said: 'Let us talk of other matters which would be conducive to amity'
-H. M. Balyuzi  (‘Edward Granville Browne and The Baha'i Faith’)

December 1848: Baha’u’llah sets out to visit the Bábis at Shaykh Tabarsi

In December 1848, to fulfill His promise to visit Shaykh Tabarsi for a second time, Baha'u'llah set out with a number of the Bábis intending to visit the besieged fortress. Those who went with Him included
But Baha'u'llah did not succeed in fulfilling His intention, for He and His companions were arrested and detained when they reached a village some nine miles from Shaykh Tabarsi.

1926: Green Acre comes under direct supervision of the National Spiritual Assembly of the Baha’is of the United States and Canada

The Green Acre Fellowship at its annual meeting in August voted a special resolution, the result of which will be that Green Acre in August, 1926, will come under the direct supervision of the National Spiritual Assembly, and its unique tradition and splendid resources will be joined to the Baha’i Cause in North America. It is the great significance of Green Acre that it brings an opportunity of applying the Baha’i spirit and principles to the most practical problems of daily life, besides affording a most adequate platform for the spread of the Message in a dignified and universal way. This action on the part of the Fellowship is a truly gratifying indication that a new period of expansion has opened for the Cause.

Several Committees are already engaged in planning for an increase of the activities of Green Acre and details will be published in an early number of the News Letter.
(Baha’i News Issue no. 7, September 1925)

1925: National Spiritual Assembly of the Baha’is of the United States and Canada opens a central office at Green Acre - Horace Holley devotes his entire time at central office

Since the establishment of the National Spiritual Assembly by the Guardian of the Cause, the activities of the believers throughout the United States and Canada have centered around that body more and more. The responsibility placed upon the members, already considerable, will increase steadily, with the growth of the Cause itself.

For some time it has been apparent to those in touch with this phase of the work that there is urgent need for a central office with a secretary able to devote all of his time to the correspondence and other duties incumbent upon the National Spiritual Assembly.

The difficulty of finding a person with the necessary qualifications and at the same time so situated that he could enter upon this service with the compensation which could be voted at the present time, has been a serious obstacle to the establishment of this necessary office.

The National Spiritual Assembly is happy to announce that arrangements have been made whereby, early in October, a central office will be opened at Green Acre, South Eliot, Maine.
Read more »

“Bahá’u’lláh’s lengthiest epistle to any single sovereign” -- Lawḥ-i-Sulṭán, (the Tablet to Náṣiri’d-Dín Sháh)

Of the various writings that make up the Súriy-i-Haykal, one requires particular mention. The Lawḥ-i-Sulṭán, the Tablet to Náṣiri’d-Dín Sháh, Bahá’u’lláh’s lengthiest epistle to any single sovereign, was revealed in the weeks immediately preceding His final banishment to ‘Akká. It was eventually delivered to the monarch by Badí‘, a youth of seventeen, who had entreated Bahá’u’lláh for the honour of rendering some service.  His efforts won him the crown of martyrdom and immortalized his name. The Tablet contains the celebrated passage describing the circumstances in which the divine call was communicated to Bahá’u’lláh and the effect it produced.  Here, too, we find His unequivocal offer to meet with the Muslim clergy, in the presence of the Sháh, and to provide whatever proofs of the new Revelation they might consider to be definitive, a test of spiritual integrity significantly failed by those who claimed to be the authoritative trustees of the message of the Qur’án.
- The Universal House of Justice  (Introduction to ‘The Summons of the Lord of Hosts’)

The House of 'Abbúd – some historical background 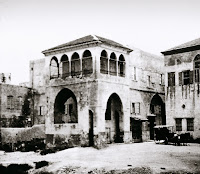 The eastern section was so insufficient to the needs of Bahá'u'lláh and His family that no less than thirteen persons of both sexes had to accommodate themselves in one of its rooms.

Bahá'u'lláh had one room of the eastern section to Himself, and it was there that He revealed His Book of Laws, the Kitáb-i-Aqdas (circa 1873). At the time of the wedding of 'Abdu'l-Bahá one room, which is now situated between the two sections of the House, was built by 'Abbúd, and the wedding took place there. Subsequently, 'Abbúd turned over the western part to Bahá'u'lláh. Bahá'u'lláh then gave His room in the eastern part to 'Abdu'l-Bahá, and occupied one of the rooms of the western section, which pilgrims are now able to visit.
Read more »

'Abdu'l-Bahá's journey across America was remarkable. He was 68 years old and had been a prisoner most of His life. When He set out from Egypt He was unwell and planned only to travel to the American East coast and to Chicago. However, the American Bahá'ís begged Him to visit their communities and He undertook the strenuous three thousand-mile journey across the continent by train, sitting up most nights in a chair rather than spend money on a sleeping compartment. He spoke at public meetings nearly every day, sometimes three times a day, and gave hundreds of private interviews. His hectic and exhausting schedule is well-documented by Mírzá Mahmúd, who frequently alludes to the anxiety of the Master's companions over His health. Mahmúd's telling references to the simplicity of 'Abdu'l-Bahá's lifestyle -- `For dinner, 'Abdu'l-Bahá ate only a little bread and cheese and went to bed' -- contrast with the opulent lives lived by many of the Americans who visited Him.
(Preface to 'Mahmud’s Diary', published by George Ronald, 1997)

November 1866: An extraordinary event took place in the sky

The spectacular shower of meteors in the early hours of the morning of 14 November 1866 was observed all over Europe. It was an extraordinary event exciting comment from professional astronomers and laymen alike. The following sample account is from The Times Saturday, 17 November 1866:

The Rev. Robert Main, the Radcliffe Observer at Oxford, gives the following account of the meteorological phenomenon of Tuesday night last:  --

'...This great display began about 13h. (or 1 o'clock in the morning), and reached its maximum at about 13h.24m., after which time it gradually began to slacken. The watch, however, was kept up till 18h., though after 15h., there were not many meteors seen. In all there were observed not fewer than 3,000 during the night, of which about 2,000 fell between 13h. and 14h., or between 1 a.m. and 2 a.m. As to the general appearance of the meteors, it was noticed that the majority of them were of a whitish or yellowish colour. Some, however, were reddish or orange-coloured, and one meteor was noticed to be bluish. The brightest left generally a train behind them, which was to be seen for a few seconds after the meteor disappeared.'
(Adapted from ‘The Revelation of Baha’u’llah', by Adib Taherzadeh, vol. 2)

Some Historical Events During the Month of February

From: Baha'i Calendar -- this month in history