1945: First Local Spiritual Assembly of the Baha'is of Guayaquil, Ecuador 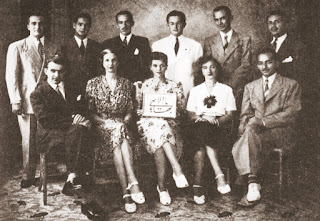 Photographed with the members of the Spiritual Assembly are the two teachers who helped in the establishment of this Assembly.
(The Baha'i World 1944-1946)

2017 - Education is not a Crime: --> Murals in Harlem, New York, as symbols of solidarity and resilience 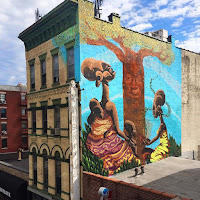 Date of the publication of the Writings of Bahá’u’lláh

The subject you had raised with regard to the date of the publication of the writings of Bahá’u’lláh is interesting as it is important… The earliest published writings of Bahá’u’lláh date from the nineties of the last century. Over forty years ago the Aqdas, a volume of general Tablets including Tarazát, Ishráqát, and others were published in Ishqábád (Russia) and Bombay respectively and copies of these though rare are still procurable. Simultaneously with these, if not earlier, some of the writings of Bahá’u’lláh were published by the Oriental Department of the Imperial Russian University at St. Petersburgh under the supervision of its director Baron Rosen (and more particulars about these could be found in the books of E. G. Browne) and these of course are not undated like some of those published in Bombay.

The main bulk of the writings of Bahá’u’lláh however are to be found in manuscript form written by noted scribes after the fashion of orientals. These scribes did not leave all their manuscripts undated and Jinábí Zain, a very noted Bahá’í scribe, always dated his copies of the writings of Bahá’u’lláh at the end of the volume in what E. G. Browne calls ‘colophenes’ and the description of some of these colophenes could be found in the works of the Cambridge Professor.

The son of the above-mentioned scribe is still living in Haifa and does very much the same work as his father. He claims that as early as 1868 his father used to write copies of the Íqán for the Bahá’ís in Persia as a source of livelihood, and that after 1885 when he went to Akká to join Bahá’u’lláh’s party his entire work and time was devoted to copying the sacred writings for sale among Bahá’ís. These copies are to be found all throughout the East and are almost invariably dated.
- Shoghi Effendi  (From a letter dated 9 February 1930 written on behalf of Shoghi Effendi to an individual believer; ‘Unfolding Destiny’)

Consequences of rejecting the Message of God brought by Bahá’u’lláh: --> Násiri’d-Dín Sháh – the “Prince of Oppressors” 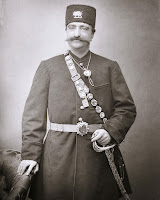 …the fate that has overtaken those kings, ministers and ecclesiastics, in the East as well as in the West, who have, at various stages of Bahá’u’lláh’s ministry, either deliberately persecuted His Cause, or have neglected to heed the warnings He had uttered, or have failed in their manifest duty to respond to His summons or to accord Him and His message the treatment they deserved, particular attention…

The vain and despotic Náṣiri’d-Dín Sháh, denounced by Bahá’u’lláh as the “Prince of Oppressors”; of whom He had written that he would soon be made “an object-lesson for the world”; whose reign was stained by the execution of the Báb and the imprisonment of Bahá’u’lláh; who had persistently instigated his subsequent banishments to Constantinople, Adrianople and Akká; who, in collusion with a vicious sacerdotal order, had vowed to strangle the Faith in its cradle, was dramatically assassinated, in the shrine of Sháh ‘Abdu’l-‘Aẓím, on the very eve of his jubilee, which, as ushering in a new era, was to have been celebrated with the most elaborate magnificence, and was to go down in history as the greatest day in the annals of the Persian nation. The fortunes of his house thereafter steadily declined, and finally through the scandalous misconduct of the dissipated and irresponsible Aḥmad Sháh, led to the eclipse and disappearance of the Qájár dynasty.
- Shoghi Effendi  (‘God Passes By’)