The Garden of Ridvan 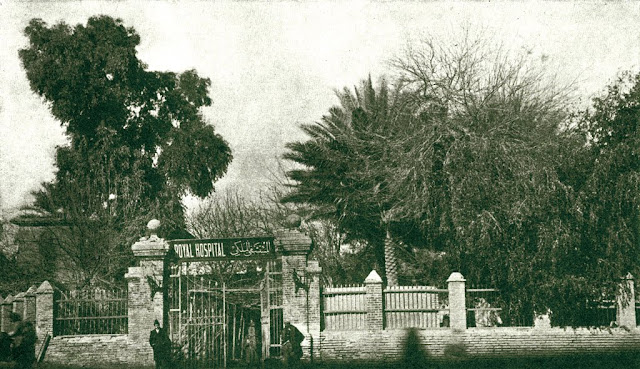 Entrance to the Garden of Ridvan where Baha'u'llah declared His Mission in 1863 and after twelve days departed for Constantinople. ... The beauty of this garden is apparent through its service to humanity -- that is, it was a hospital then and two successive governments have used it similarly  ... [as] a center where bodily ailments are healed. (The Baha'i World 1926-1928)

Shoghi Effendi was the eldest son of ‘Abdu’l-Baha’s daughter Diya’iyyih Khanum (d. 1951) and Mirza Hadi Shirazi Afnan (d. 1955). He was born in ‘Akka on 1 March 1897, the eldest of ‘Abdu’l-Baha’s grandsons, named in the Master’s Will as His successor when he was still a child. Educated at first at home with other children of the household, he was later sent to Catholic school in Haifa and Beirut and then to the Syrian Protestant College (the predecessor of the American University) in Beirut, spending his summer holidays as one of his grandfather’s assistants. He gained an arts degree from the college in 1918, and became ‘Abdu’l-Baha’s chief secretary. Then in 1920, he went to Oxford University (Balliol College), where he studied political science and economics, and also sought tp perfect his English so as to be better able to translate Baha’i literature into that language. He was still in the midst of his studies when summoned to return to Haifa at the news of his grandfather’s death.
(Peter Smith, A Concise Encyclopedia of the Baha’i Faith)

In the early summer of 1848, Baha’u’llah hosted a gathering at a village of Badasht in northern Perisa. He “rented, amidst pleasant surroundings, three gardens, one of which He assigned to Quddus, another to Tahirih, whilst the third He reserved for Himself." (Shoghi Effendi, God Passes By, p. 31) This gathering was called for by the Bab for His most eminent followers, known as Babis, to attend. “The primary purpose of that gathering was to implement the revelation of the Bayan by a sudden, a complete and dramatic break with the past -- with its order, its ecclesiasticism, its traditions, and ceremonials. The subsidiary purpose of the conference was to consider the means of emancipating the Báb from His cruel confinement in Chihriq. The first was eminently successful; the second was destined from the outset to fail.” (ibid, p. 31) It became known as the Badasht Conference. It is estimated that there were 81 Babis in attendance. They were all guests of Baha’u’llah for the entire duration of the conference which lasted about twenty-two days.

“On each of the twenty-two days of His sojourn in that hamlet He [Baha’u’llah] revealed a Tablet, which was chanted in the presence of the assembled believers. On every believer He conferred a new name, without, however, disclosing the identity of the one who had bestowed it. He Himself was henceforth designated by the name Baha. Upon the Last Letter of the Living was conferred the appellation of Quddus, while Qurratu'l-'Ayn was given the title of Tahirih. By these names they were all subsequently addressed by the Báb in the Tablets He revealed for each one of them.” (ibid, p. 31)

The Bab’s Imprisonment in the Fortress of Chihriq

The fortress of Chihriq where the Bab was imprisoned for almost all of the last two years of His life is located in north-western Iran in the region of Urumiyyih of the province of Azerbaijan. This was the second fortress in which the Bab was imprisoned. The first one was called Maku. The Bab called Chihriq the ‘Grievous Mountain’ .. to differentiate it from Maku which He had called the ‘Open Mountain’ -- although the pattern of imprisonment was similar, with initial strictness eventually giving way to comparative freedom, as the warden, Yahya Khan, became devoted to his prisoner. The Bab received large numbers of visitors at Chiriq, more than He had received at Maku. He revealed many of His Writings in Chihriq, including the Arabic Bayan and His powerful Tablet of ‘Sermon of Wrath’ to the then Persian Prime Minister, Haji Mirza Aqas. It was during this period that a very knowledgeable Persian, whom the Bab later gave the title of Dayyan (Judge), became a believer. He is reported to have been unusual for his range of knowledge and learning which included Syriac and Hebrew and was the recipient of the Bab’s ‘Tablet of Letters’ (Lawh-i-Hurufat). It was also during this period that people in the town of Urumiyyih greeted the Bab very enthusiastically when He went to the public bath and vied with each other in taking the water after He had used it because the water was thus assumed to have acquired holiness.
(Adapted from A Basic Baha’i Dictionary, by Wendi Momen; and A Concise Encyclopedia of the Baha’i Faith, by Peter Smith)