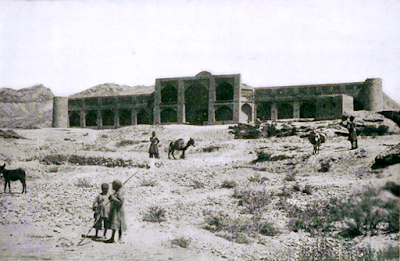 A Caravansary or “Hotel” on the road to Shiraz, Persia
Inside its walls is an immense court yard where travelers are herded indiscriminately with their camels and other beasts of burden. These “hotels” are designed to give the caravans a resting place at night protected from marauders. 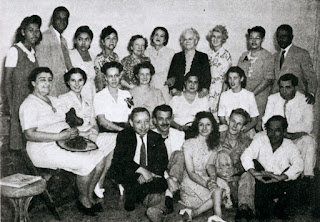 1976: Baha’is in the Province of Khurasan, Iran, “won (a) unique distinction”

15 October 1976
To the friends gathered at the International Teaching Conference in Nairobi, Kenya 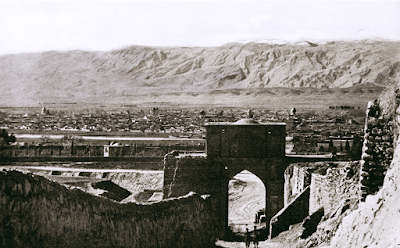 The capital of the Province of Fars is situated in a fertile plain at an elevation of a mile above sea level. A mud wall four miles in circumference surrounds the town, which has a population of 60,000.
(National Geographic, 1921) 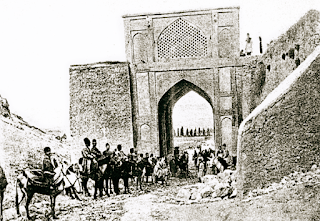 It was revealed by 'Abdu'l-Baha on Sunday morning, March 26th 1916, in 'Abdu'l-Bahá's room at the house in Bahji, addressed to the Bahá'ís of nine North-Eastern States of the United States: Maine, New Hampshire, Rhode Island, Connecticut, Vermont, Pennsylvania, Massachusetts, New Jersey, and New York.
- Hand of the Cause Balyuzi  (‘Abdu'l-Baha - The Centre of the Covenant’)

An example of psychological pressure, machination and scheming by the Ottoman authorities against Baha’u’llah

The State officials, considering the secret progress of the Extended Cord have, from every direction, incited and aided Mine adversaries. In the Great City (Constantinople) they have roused a considerable number of people to oppose this Wronged One. Things have come to such a pass that the officials in that city have acted in a manner which hath brought shame to both the government and the people. A distinguished siyyid, whose well-known integrity, acceptable conduct, and commercial reputation, were recognized by the majority of fair-minded men, and who was regarded by all as a highly honored merchant, once visited Beirut. In view of his friendship for this Wronged One they telegraphed the Persian Dragoman informing him that this siyyid, assisted by his servant, had stolen a sum of money and other things and gone to Akká. Their design in this matter was to dishonor this Wronged One. And yet, far be it from the people of this country to allow themselves to be deflected, by these unseemly tales, from the straight path of uprightness and truth. Briefly, they have assaulted Me from every side, and are reinforcing Mine adversaries.
- Baha’u’llah  (‘Epistle to the Son of the Wolf’)