November 1, 1845: Probably the first European newspaper reference to the Báb and the persecution of the Bábis 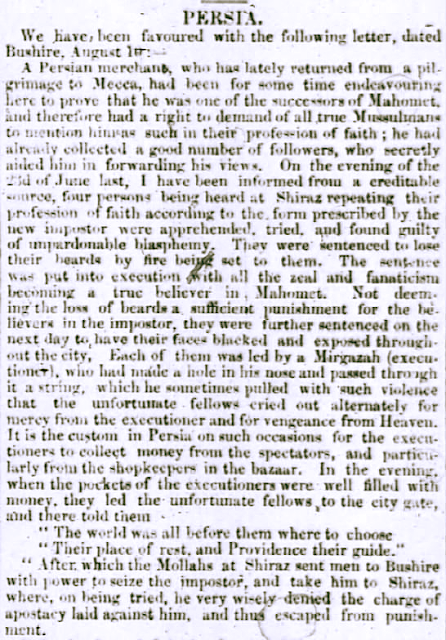 We have been favored with the following letter, dated Bushire, August 10:

A Persian merchant, who has lately returned from a pilgrimage to Mecca, had been for some time endeavoring here to prove that he was one of the successors of Mahomet, and there had a right to demand of all true Mussulmans to mention him as such in their profession of faith; he had already collected a good number of followers, who secretly aided him in forwarding his views. On the evening of the 23d of June last, I have been informed from a creditable source, four persons being heard at Shiraz repeating their profession of faith according to the form prescribed by the new impostor were apprehended, tried, and found guilty of unpardonable blasphemy. They were sentence to lose their beards by fire being set to them. The sentence was put into execution with all the zeal and fanaticism becoming a true believer in Mahomet. Not deeming the loss of beards a sufficient punishment for the believers in the impostor, they were further sentenced on the next day to have their faces blacked and exposed throughout the city. Each of them was led by a Mirgazah (executioner), who had made a hole in his nose and passed through it a string, which he sometimes pulled with such violence that the unfortunate fellows cried out alternatively for mercy from the executioner and for vengeance from Heaven. It is custom in Persia on such occasions for the executioners to collect money from the spectators, and particularly from the shopkeepers in the bazaar. In the evening, when the pockets of the executioners were well filled with money, they led the unfortunate fellows to the city gage, and there told them

"The world was all before them where to choose
Their place of rest, and Providence their guide."

After which the Mollahs at Shiraz sent men to Bushire with power to seize the impostor, and take him to Shriaz, where, on being tried, he very wisely denied the charge of apostasy laid against him, and this escaped from punishment. (The Times (London), November 1, 1845)

1971: The “imposition of disabilities” to “outright oppression” that a number of Baha’i communities experienced

Restrictive measures, directed against the Faith, and varying in severity from outright oppression to imposition of disabilities make virtually impossible the achievement of the goals of the Nine Year Plan in a number of countries, particularly in the Middle East, in North West Africa, along the fringes of East Africa and certain areas in South East Asia. (The Universal House of Justice, Ridvan 1971 message to the Baha’i World; ‘Messages from the Universal House of Justice, 1963-1986’) (To read the entire message please visit Messages to the Baha’i World Community – by the Universal House ofJustice)

1908: The Baha'i Temple under construction in Ishqabad, Russia, is mentioned in an American newspaper 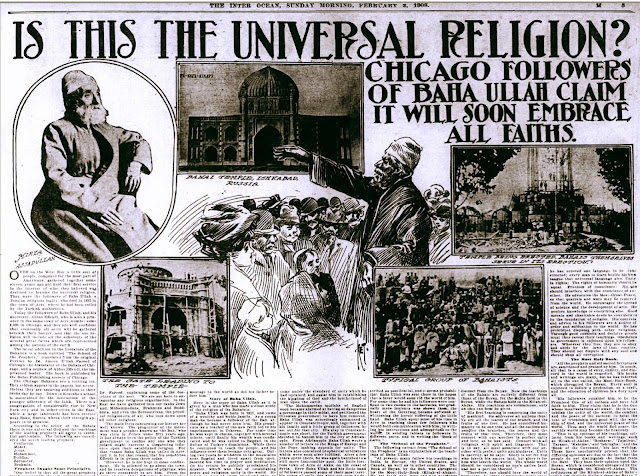