A Message from US National Spiritual Assembly:

Beginning with this issue, BAHA'I NEWS will henceforth carry as an insert a United States Supplement, which will be devoted to subjects of particular interest and concern to the believers of this country. This action brings BAHA'I NEWS more in conformity with the wishes of the beloved Guardian, Shoghi Effendi, who expressed the hope years ago that BAHA'I NEWS would become "the foremost Baha'i journal of the world."

Up to this time, BAHA'I NEWS has been designed to meet that purpose so far as possible, depending upon the material received from all parts of the world, but in addition it has been the medium of communication between the National Spiritual Assembly of the United States and its committees and the individual members of the American Baha'i community.

This new plan means that from now on any information, suggestions, recommendations, and requests that concern the believers in the United States only will be concentrated largely in the Supplement, but the main body of BAHA'I NEWS will continue to carry news and reports of Baha'i activities in the United States which are of interest to the friends throughout the world and which reflect progress in the World Crusade.
Read more »

1967: Baha'i Week proclaimed in Indianapolis - marking the 150th anniversary of the Birth of Baha’u’llah 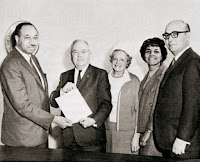 The Indianapolis Spiritual Assembly decided in March, 1967 to proclaim the Baha'i Faith through holding a "Baha'i Week" in November, 1967, marking the 150th anniversary of the Birth of Baha’u’llah and held just one year after the first proclamation week in Indiana (Fort Wayne, November, 1966). Work began immediately and preparations proceeded through the following months. A prelude to the Week was the annual State Fair Baha'i exhibit in August which publicized the coming event to at least 250,000 people. The launching of the Proclamation was in October when the Mayor of Indianapolis, John J. Barton, and a State Senator, Nelson Grills, were present at a tea commemorating the centenary of the messages of Baha’u’llah to the kings and rulers.
(US National Baha’i Review, February 1968)

June 1968: The Institution of the Continental Boards of Counselors is brought into being by the Universal House of Justice

1968: One Hundredth Anniversary of Baha'u'llah's Arrival in the Holy Land 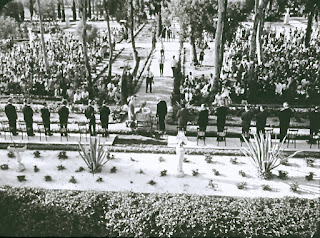 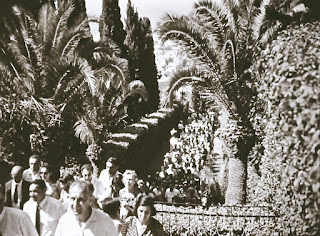 In August 1968 nearly two thousand Baha'is from many countries assembled at Bahji to commemorate the one hundredth anniversary of the arrival of Baha'u'llah in the Holy Land. They then ascended the long stairway from Carmel Avenue to the Shrine of the Báb, around which they walked in respect for the Forerunner and Herald of their Faith. ('The Baha'is and the Holy Land', an audio-visual program prepare by the NSA of the United States, 1971) 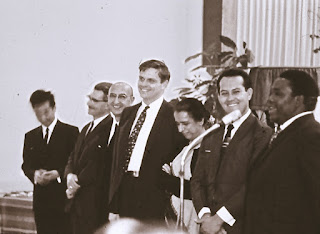 At the First International Baha'i Convention held  in the Holy Land in 1968 this delegation was sent to Jerusalem to make a formal call on Israel's President Zalman Shazar, to deliver the greetings of the convention. ('The Baha'is and the Holy Land', an audio-visual program prepare by the NSA of the United States, 1971)

Significant Events in the Life of Bahá'u'láh