This progress has accelerated notably during the Seven Year Plan, witnessed by the achievement of many important enterprises throughout the Baha'i world and vital developments at the heart of the Cause itself. these stand out as conspicuous achievements in a Plan which will be remembered as having set the seal on the third epoch of the Formative Age.

17 November 1985: The “re-interment of the remains of Mirza Muhammad-Quli, the faithful half-brother and companion in exile of Baha'u'llah and of eleven members of his family, in a new Baha'i cemetery”

It is with a feeling of joy and gratitude that we inform the Baha'i world of the befitting re-interment of the remains of Mirza Muhammad-Quli, the faithful half-brother and companion in exile of Baha'u'llah, and of eleven members of his family, in a new Baha'i cemetery on a hillside looking across Lake Kinneret and the hills of Galilee towards the Qiblih of the Faith. This historic event, coinciding fortuitously with the first formal presentation of The Promise of World Peace to a Head of State, is of especial significance in the annals of the Cause of Baha'u'llah.

On 12 November 1952 the beloved Guardian jubilantly cabled the Baha'i world his announcement of the acquisition of vitally needed property surrounding the Most Holy Shrine and the Mansion of Bahji in exchange for land donated by the grandchildren of Mirza Muhammad-Quli.

The land referred to in this cable had been in the possession of Mirza Muhammad-Quli on the eastern shore of the Sea of Galilee, at a place called Nuqayb. He and his family lived there and farmed the land for many years and on his passing, at the instruction of 'Abdu'l-Baha, his remains were buried there, as were subsequently those of members of his family.

1845: The first person, after the Letters of the Living, to embrace the Cause of the Báb – His maternal uncle who had reared Him when His father passed away

Quddús, with feelings of unshakable determination to carry out the expressed wishes of his Master, set out from Búshihr. Arriving at Shíráz, he was affectionately welcomed by Hájí Mírzá Siyyid ‘Alí, who received him in his own home and eagerly enquired after the health and doings of his beloved Kinsman. Finding him receptive to the call of the new Message, Quddús acquainted him with the nature of the Revelation with which that Youth had already fired his soul. The Báb’s maternal uncle, as a result of the endeavours exerted by Quddús, was the first, after the Letters of the Living, to embrace the Cause in Shíráz.

- Nabil  (‘The Dawn-Breakers’; translated and edited by Shoghi Effendi)

1848: The warden of the fortress of Chihríq and the kurds, who lived in the village of Chihríq soon became attracted to the Báb – testimony of a European eye-witness 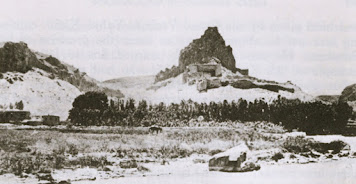 Though at the outset he [the warden of the fortress of Chihríq] acted with the utmost severity, he was eventually compelled to yield to the fascination of his Prisoner. Nor were the kurds, who lived in the village of Chihríq, and whose hatred of the Shí‘ahs exceeded even that of the inhabitants of Máh-Kú, able to resist the pervasive power of the Prisoner’s influence. They too were to be seen every morning, ere they started for their daily work, to approach the fortress and prostrate themselves in adoration before its holy Inmate. “So great was the confluence of the people,” is the testimony of a European eye-witness, writing in his memoirs of the Báb, “that the courtyard, not being large enough to contain His hearers, the majority remained in the street and listened with rapt attention to the verses of the new Qur’án.”