The First Baha’i Center in Europe Was Formed in 1898 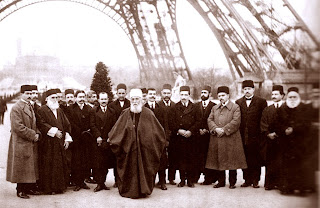 The first Baha'i center in Europe was established by May Maxwell (nee Bolles). Born in 1870 in the United States, Mrs. Maxwell spent many years resident in Paris with her mother and brother. In February 1899, she was among the first group of western pilgrims to go to Acre (in what was then Palestine) to visit 'Abdu'l-Baha, the son of Baha'u'llah and leader of the Baha’i Faith, who was still being held as a prisoner of the Ottoman Empire On her return to the French capital, she began to tell others of the new religious movement she had discovered. A significant group of Baha'is emerged around her, among them a number of artists and artisans, and believers of various nationalities, including the early English Baha'i Thomas Breakwell. 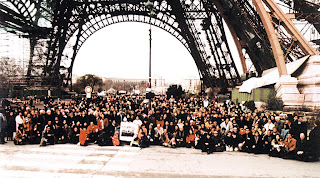 To mark the centenary of these momentous events, the Baha'i community of France held an ambitious conference in Paris from 27 to 29 November 1998. The celebrations began when more than one thousand Baha'is gathered beneath the Eiffel Tower for a photograph, on the same spot where 'Abdu'l-Baha had been photographed during His historic visit to Paris in 1913. Later, the conference opened with the participation of two thousand people, including more than two hundred guests of the Baha'is and six hundred Baha'is from outside France. The structure of the program, which was modeled on the Second Baha'i World Congress held in New York in 1992, included talks, film and video presentations and theatrical and musical segments. A high point of the conference was the colorful public concert "La Nuit de l'espoir" ("The Night of Hope"), held at the Salle de la MutualitC, one of the largest halls in Paris. Before the event, more than two hundred and fifty special guests, including ambassadors, politicians, religious and civil dignitaries, journalists, and representatives of major non-governmental organizations attended a reception and expressed great interest in and admiration for the work of the Baha’i community. Another highlight of the event was a dedication and reception held immediately after the conference at the Paris apartment where ‘Abdu’l-Baha had stayed.
(The Baha’i World, 1998-99, pp. 122-124)