Some historical facts about ‘Akka - by Hand of the Cause Mr. Furutan 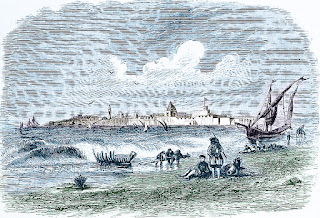 …I would like to mention some of the historical facts connected with this ancient city. The Master related to pilgrims that 'Acco (Accho, later Acre or 'Akka or 'Akko) was first built by Phoenicians. (‘Acco in Phoenician means 'curved triangle'.) Egyptian inscriptions of the fifteenth to thirteenth centuries BC indicate that 'Acco was a part of the ancient Egyptian Empire. It is also mentioned in Judges I:31.

Afterwards Assyrians and then Persians conquered this area. They were followed by Alexander the Great, the Seleucids of Syria and the Armenian king, Tigranes the Great, who, one after the other, took over this region until the Roman Empire became its ruler.

In 636 AD it was conquered by the Arabs, in 969 by the Fatimid caliphs of Egypt, in 1079 by the Seljuks, and in 1099 by the Crusaders, who ruled Acre (as the Christians called it) with only brief interruption for two centuries.

Baldwin I seized Acre in 1104 and it became a part of the Christian Kingdom of Jerusalem. In 1187 Saladin raised the banner of Islam on the towers of Acre, but it was soon recovered for the Christians in the Third Crusade and remained their capital until the Mamluks of Egypt conquered and destroyed the city in 1291.


The construction of the second fortification of Acre was begun in 1202 and completed ten years later. Al-Jazzar fortified the city with a new wall, partly still visible. After the unsuccessful siege of a few months in 1799 by Napoleon I following his invasion of Egypt, al-Jazzar, with support of a British fleet, defeated him. Afterwards the present ramparts were constructed and the sea wall strengthened.

Ibrahim Pasha with an Egyptian army took 'Akka in 1832 but in 1840 with the support of British and Austrian naval forces, the fortified city was restored to the Turks. It remained under Ottoman rule until 1917 when it was taken by the British Army.

In 1948 the State of Israel was established and 'Akka became one of its historical cities.

Ashkelon (Askelon or Ascalon) was an ancient sea-port village on the Mediterranean coast north of Gaza. It was first inhabited about 2000 BC and is mentioned in Egyptian texts of that time. During the next two millenniums the city was under Egyptian, Assyrian, Babylonian and Hellenic rule. Nebuchadnezzar destroyed the city in 604 BC and deported its leading citizens to Babylon, and nearly three centuries later Alexander the Great conquered Ashkelon on his march to Egypt. Afterwards, in 636 AD, it was taken by the Arabs.

Today, close to the ruins of that old city, is the new city of Migdal-Ashkelon. But of all the ancient and much fought-over cities along the Mediterranean, the Blessed Beauty in many of His Tablets characterized 'Akka as the most ruinous of all. It 'is the most desolate of the cities of the world, the most unsightly of them in appearance…' (See God Passes By, p. 186.)
- ‘Ali-Akbar Furutan  (‘The Story of My Heart)