1934: Last day of Tarbiyat school and the shocking effect of its closure on 1500 students – excerpt from a letter by Clara and Adelaide Sharp from Tehran 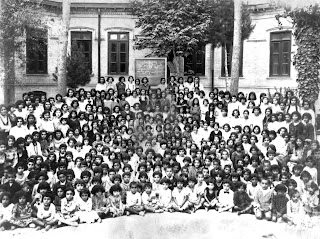 The closing of the school was a great shock although we had expected that it might happen. The Bab’s Martyrdom in this country is kept by the Arabic calendar and came this year on December 6. ... Saturday afternoon a policeman came with an order from the Board of Education to close the schools. They said Tarbiyat had been closed for no reason Thursday and the license for Tarbiyat School existed no longer. The order came after school had been dismissed and there was no time to tell all the children, so Adelaide and her assistant went to school the next morning at 6:30 A.M., before the policeman could get there, and as the children came to enter the school they had to be turned back. This was very hard as many of the little ones did not understand and called to Adelaide to tell the policeman to let them in, and many cried. ... The Baha’i children have not gone to other schools. ... The Muhammadan children of course went to other schools but they are not satisfied and happy. Tarbiyat School was far ahead of the other Persian schools, in their text books, character training and everything else. All the schools say this. The educated Muhammadans are with the Baha’is. One important Muhammadan said he knew it was a Baha’i School when he sent his children there and said that was no reason for closing the school. ... We had many of the best families in town sending their children and they are feeling very badly about it. There were nearly 1500 pupils in both schools and about 50 teachers. ... This has advertised the school and called attention to the Cause and what they are working for more than anything else that could have happened. ... Shoghi Effendi has written for us to be patient and not make any disturbance but persevere and keep trying to gain religious liberty, that the school will again open and things will be better than ever.