April 22, 1898:The Baha'is of Mandalay, Burma, with the marble casket offered by them for the remains of the Bab 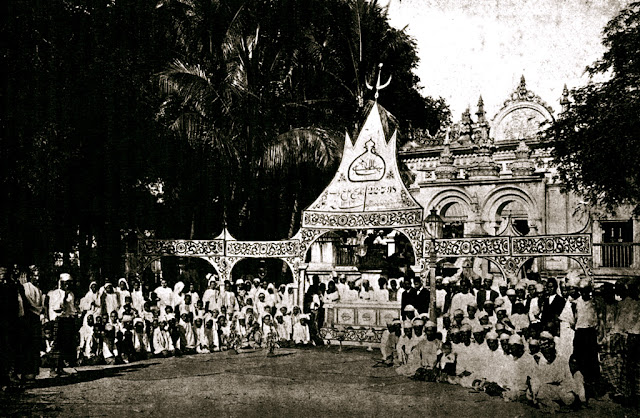 The Baha'is of Mandalay, Burma, with the marble casket offered by them for the remains of the Bab, April 22, 1898.
﻿
On the morning of March 21st 1909, the day of Naw-Ruz, 'Abdu'l-Bahá had the marble sarcophagus -- gift of the Bahá'ís of Rangoon -- carried up the mountain and placed in the vault. That evening He laid in the sarcophagus the wooden casket which contained the inseparable remains of the Báb and the disciple who had died with Him. A solitary lamp lit the scene, so poignant and yet so exultant. The Báb had been cruelly maligned, cruelly wronged, cruelly put to death. His torn and smashed body had had no home for many long years. Now the heart of Carmel was receiving it forevermore. Of this event Zechariah had written: 'Thus speaketh the Lord of hosts, saying, Behold the man whose name is The Branch; and he shall grow up out of his place, and he shall build the temple of the Lord'. How mysteriously and indubitably had his prophecy come true. 'The Branch' had built 'the temple of the Lord', had raised His 'tabernacle' on His Mountain -- on Carmel -- the Mountain of God.
(Balyuzi, ‘Abdu'l-Baha - The Centre of the Covenant’)