1846: Divine intervention at exactly the same time as the Báb was arrested – an outbreak of a devastating cholera in Shiraz 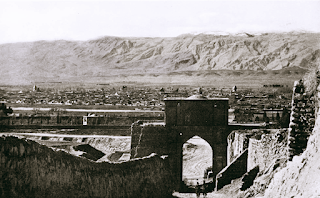 While the situation was steadily deteriorating in the provinces, the bitter hostility of the people of Shíráz was rapidly moving towards a climax. Husayn Khán, [the Governor] vindictive, relentless, exasperated by the reports of his sleepless agents that his Captive’s power and fame were hourly growing, decided to take immediate action. It is even reported that his accomplice, Hájí Mírzá Áqásí, [the Prime Minister] had ordered him to kill secretly the would-be disrupter of the state and the wrecker of its established religion. By order of the governor the chief constable, ‘Abdu’l-Hamíd Khán, scaled, in the dead of night, the wall and entered the house of Hájí Mírzá Siyyid ‘Alí, where the Báb was confined, arrested Him, and confiscated all His books and documents.

That very night, however, took place an event which, in its dramatic suddenness, was no doubt providentially designed to confound the schemes of the plotters, and enable the Object of their hatred to prolong His ministry and consummate His Revelation. An outbreak of cholera, devastating in its virulence, had, since midnight, already smitten above a hundred people. The dread of the plague had entered every heart, and the inhabitants of the stricken city were, amid shrieks of pain and grief, fleeing in confusion. Three of the governor’s domestics had already died. Members of his family were lying dangerously ill. In his despair he, leaving the dead unburied, had fled to a garden in the outskirts of the city. ‘Abdu’l-Hamíd Khán, [the chief constable in Shiraz] confronted by this unexpected development, decided to conduct the Báb to His own home. He was appalled, upon his arrival, to learn that his son lay in the death-throes of the plague. In his despair he threw himself at the feet of the Báb, begged to be forgiven, adjured Him not to visit upon the son the sins of the father, and pledged his word to resign his post, and never again to accept such a position. Finding that his prayer had been answered, he addressed a plea to the governor begging him to release his Captive, and thereby deflect the fatal course of this dire visitation. Husayn Khán acceded to his request, and released his Prisoner on condition of His quitting the city.
- Shoghi Effendi  (‘God Passes By’)