Pope Pius IX: “the 254th pope since the inception of St. Peter’s primacy” – received a powerful Tablet from Baha’u’llah 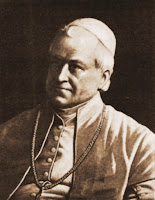 ...Pope Pius IX. It was to him who regarded himself as the Vicar of Christ that Bahá’u’lláh wrote that “the Word which the Son [Jesus] concealed is made manifest,” that “it hath been sent down in the form of the human temple,” that the Word was Himself, and He Himself the Father. It was to him who styling himself “the servant of the servants of God” that the Promised One of all ages, unveiling His station in its plenitude, announced that “He Who is the Lord of Lords is come overshadowed with clouds.” It was he, who, claiming to be the successor of St. Peter, was reminded by Bahá’u’lláh that “this is the day whereon the Rock [Peter] crieth out and shouteth ... saying: ‘Lo, the Father is come, and that which ye were promised in the Kingdom is fulfilled.’” It was he, the wearer of the triple crown, who later became the first prisoner of the Vatican, who was commanded by the Divine Prisoner of Akká to “leave his palaces unto such as desire them,” to “sell all the embellished ornaments” he possessed, and to “expend them in the path of God,” and to “abandon his kingdom unto the kings,” and emerge from his habitation with his face “set towards the Kingdom.”

Count Mastai-Ferretti, Bishop of Imola, the 254th pope since the inception of St. Peter’s primacy, who had been elevated to the apostolic throne two years after the Declaration of the Báb, and the duration of whose pontificate exceeded that of any of his predecessors, will be permanently remembered as the author of the Bull which declared the Immaculate Conception of the Blessed Virgin (1854), referred to in the Kitáb-i-Íqán, to be a doctrine of the Church, and as the promulgator of the new dogma of Papal Infallibility (1870). Authoritarian by nature, a poor statesman, disinclined to conciliation, determined to preserve all his authority, he, while he succeeded through his assumption of an ultramontane attitude in defining further his position and in reinforcing his spiritual authority, failed, in the end, to maintain that temporal rule which, for so many centuries, had been exercised by the heads of the Catholic Church.

This temporal power had, throughout the ages, shrunk to insignificant proportions. The decades preceding its extinction were fraught with the gravest vicissitudes. As the sun of Bahá’u’lláh’s Revelation was mounting to full meridian splendor, the shadows that beset the dwindling patrimony of St. Peter were correspondingly deepening. The Tablet of Bahá’u’lláh, addressed to Pius IX, precipitated its extinction. A hasty glance at the course of its ebbing fortunes, during those decades, will suffice. Napoleon I had driven the Pope from his estates. The Congress of Vienna had reestablished him as their head and their administration in the hands of the priests. Corruption, disorganization, impotence to ensure internal security, the restoration of the inquisition, had induced an historian to assert that “no land of Italy, perhaps of Europe, except Turkey, is ruled as is this ecclesiastical state.” Rome was “a city of ruins, both material and moral.” Insurrections led to Austria’s intervention. Five great Powers demanded the introduction of far-reaching reforms, which the Pope promised but failed to carry out. Austria again reasserted herself, and was opposed by France. Both watched each other on the Papal estates until 1838, when, on their withdrawal, absolutism was again restored. The Pope’s temporal power was now denounced by some of his own subjects, heralding its extinction in 1870. Internal complications forced him to flee, in the dead of night and in the disguise of a humble priest, from Rome which was declared a republic. It was later restored by the French to its former status. The creation of the kingdom of Italy, the shifting policy of Napoleon III, the disaster of Sedan, the misdeeds of the Papal government denounced by Clarendon, at the Congress of Paris, terminating the Crimean War, as a “disgrace to Europe,” sealed the fate of that tottering dominion.

In 1870, after Bahá’u’lláh had revealed His Epistle to Pius IX, King Victor Emmanuel II went to war with the Papal states, and his troops entered Rome and seized it. On the eve of its seizure, the Pope repaired to the Lateran and, despite his age and with his face bathed in tears, ascended on bended knees the Scala Santa. The following morning, as the cannonade began, he ordered the white flag to be hoisted above the dome of St. Peter. Despoiled, he refused to recognize this “creation of revolution,” excommunicated the invaders of his states, denounced Victor Emmanuel as the “robber King” and as “forgetful of every religious principle, despising every right, trampling upon every law.” Rome, “the Eternal City, on which rest twenty-five centuries of glory,” and over which the Popes had ruled in unchallengeable right for ten centuries, finally became the seat of the new kingdom, and the scene of that humiliation which Bahá’u’lláh had anticipated and which the Prisoner of the Vatican had imposed upon himself.

“The last years of the old Pope,” writes a commentator on his life, “were filled with anguish. To his physical infirmities was added the sorrow of beholding, all too often, the Faith outraged in the very heart of Rome, the religious orders despoiled and persecuted, the Bishops and priests debarred from exercising their functions.”

Every effort to retrieve the situation created in 1870 proved fruitless. The Archbishop of Posen went to Versailles to solicit Bismarck’s intervention in behalf of the Papacy, but was coldly received. Later a Catholic party was organized in Germany to bring political pressure on the German Chancellor. All, however, was in vain. The mighty process already referred to had to pursue inexorably its course. Even now, after the lapse of above half a century, the so-called restoration of temporal sovereignty has but served to throw into greater relief the helplessness of this erstwhile potent Prince, at whose name kings trembled and to whose dual sovereignty they willingly submitted. This temporal sovereignty, practically confined to the miniscule City of the Vatican, and leaving Rome the undisputed possession of a secular monarchy, has been obtained at the price of unreserved recognition, so long withheld, of the Kingdom of Italy. The Treaty of the Lateran, claiming to have resolved once and for all the Roman Question, has indeed assured to a secular Power, in respect of the Enclaved City, a liberty of action which is fraught with uncertainty and peril. “The two souls of the Eternal City,” a Catholic writer has observed, “have been separated from each other, only to collide more severely than ever before.”

Well might the Sovereign Pontiff recall the reign of the most powerful among his predecessors, Innocent III who, during the eighteen years of his pontificate, raised and deposed the kings and the emperors, whose interdicts deprived nations of the exercise of Christian worship, at the feet of whose legate the King of England surrendered his crown, and at whose voice the fourth and the fifth crusades were both undertaken.
- Shoghi Effendi  (‘The Promised Day Is Come’)