A Message from ‘Abdu’l-Baha to the American People – “An Appeal for Peace”, published in San Francisco Chronicle, October 4, 1912 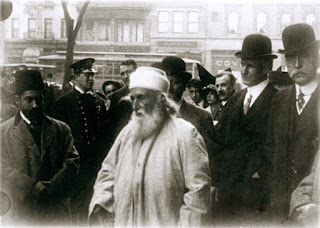 Praise be to God: The United States has in reality made extraordinary progress; day by day they are advancing toward the ultimate goal! The material virtues of the people are many; now they must think of the ideal virtues, so that the highest of the perfections of humanity may illumine the regions of America.

Among the highest virtues is universal peace, the oneness of humanity. The chief ailment of humanity today is international strife; this militates against the advancement of the material and ideal virtues.

The continent of America is isolated so far as other countries are concerned; the government is not thinking of making conquests, of enlarging the circle of colonization. They are not thinking to contend with other nations so far as financial, commercial and political supremacy is concerned. They are not the rival of any other nation. Their utmost desire is this: That the continent of America be protected.

They are engaged in the amelioration of internal conditions; they are not engaged in warfare with any nation. Therefore, they have the time and ability to raise the standard of universal peace and spread the doctrine of the oneness of God. May their influence spread and permeate to all parts of the world.


Other peoples of the world have to contend with international difficulties. First, the nations are rivals with each other so far as commercial advantages are concerned. Second, they are thinking of the nation self-aggrandizement. Third, they are thinking of planting new colonies. Therefore, it is difficult for them to step into this field, to uphold international peace, because they are contending, warlike, victory-loving people. They cannot be instrumental in promulgating international peace.

But, praise be to God, the American Government is no warlike government; the American democracy is not founded upon warlike doctrines. Hence it becomes this democracy to uphold international peace and spread it throughout the world. Through the promulgation of this doctrine will be distributed the greatest blessings.

His holiness Baha’u’llah, fifty years ago spread broadcast His great Movement, proclaimed the benefits of international peace. This took place at a time when the thought was not in the minds of men, nor the words upon the tongues of the people. At the time He summoned people from all parts of the Orient. He addressed letters to the sovereigns of Europe, setting forth the results to accrue from the establishment of universal peace. He invited all to participate in a worlds arbitral court of justice, to be composed of representatives of every government in the world, the delegates thereto to be chosen and ratified by the governments. Thereto would be referred disputes between nations for settlement. In case any government or nation should prove rebellions concerning any decision of the court, the other nations should coalesce to force it into obedience.

My fervent hope and fond desire concerning the American people is that through their instrumentality the scope of this project will be enlarged and that earnest concerted action between the nations of the world will result therefrom.

This great Cause, which alone insures the happiness of the world, must receive support throughout the world.
- ‘Abdu’l-Baha (Star of the West, vol. 5, no. 11, September 27, 1914)