1970: Centenary of the martyrdom of the Purest Branch, Mirza Mihdi – the Universal House of Justice called for special worldwide prayer 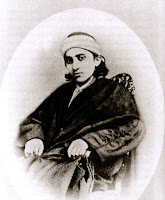 25 March 1970
To all National Spiritual Assemblies

In commemoration of the centenary of the martyrdom of the Purest Branch, which falls on 23 June 1970, we call upon the Baha'is of the world to unite in prayer for "the regeneration of the world and the unification of its peoples."

During those days one hundred years ago Baha'u'llah was enduring His imprisonment in the Barracks of 'Akka. Upon the tribulations which weighed Him down was heaped the fatal accident which befell His young son, His companion and amanuensis, Mirza Mihdi, the Purest Branch, whose dying supplication to his Father was to accept his life "as a ransom for those of His loved ones who yearned for, but were unable to attain, His presence." In a Tablet revealed in that grievous hour Baha'u'llah sorrows that "This is the day whereon he that was created of the light of Baha has suffered martyrdom, at a time when he lay imprisoned at the hands of his enemies." Yet He makes clear that the youth passing has a far profounder meaning than His acceptance of the simple request, declaring that "Thou art, verily, the trust of God and His treasure in this land. Erelong will God reveal through thee that which He hath desired." In a prayer revealed for His son He proclaims the purpose underlying the tragedy: "I have, O my Lord, offered up that which Thou hast given Me, that Thy servants may be quickened, and all that dwell on earth be united."  Thus upon a youth of consummate devotion who demonstrated such beauty of spirit and total dedication was conferred a unique station in the Cause of God.

In your recalling the bereavement of Baha'u'llah upon the loss of His loved son, and honouring a highly significant event in the Faith, we leave it to the discretion of the Assemblies whether they choose to hold special gatherings of prayer. In the Holy Land at the World Centre on Mount Carmel there will be an observance at the grave of Mirza Mihdi, at which time his pure example and sacrifice for all mankind will be remembered through the words of his glorious Father.