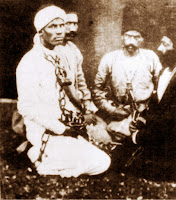 During the latter days [passed] in Adrianople Bahá’u’lláh composed a detailed epistle setting forth all matters clearly and minutely. He unfolded and expounded the main principles of the sect, and made clear and plain its ethics, manners, course, and mode of conduct: He treated certain political questions in detail, and adduced sundry proofs of His truthfulness: He declared the good intent, loyalty, and sincerity of the sect, and wrote some fragments of prayers, some in Persian, but the greater part in Arabic. He then placed it in a packet and adorned its address with the royal name of His Majesty the King of Persia, and wrote [on it] that some person pure of heart and pure of life, dedicated to God, and prepared for martyr-sacrifice, must, with perfect resignation and willingness, convey this epistle into the presence of the King.

A youth named Mírzá Badí, a native of Khurásán, took the epistle, and hastened toward the presence of His Majesty the King. The Royal Train had its abode and station outside Tihrán, so he took his stand alone on a rock in a place far off but opposite to the Royal Pavilion, and awaited day and night the passing of the Royal escort or the attainment of admission into the Imperial Presence. Three days did he pass in a state of fasting and vigilance: an emaciated body and enfeebled spirit remained. On the fourth day the Royal Personage was examining all quarters and directions with a telescope when suddenly his glance fell on this man who was seated in the utmost respectful attitude on a rock. It was inferred from the indications [perceived] that he must certainly have thanks [to offer], or some complaint or demand for redress and justice [to prefer].

[The King] commanded one of those in attendance at the court to inquire into the circumstances of this youth. On interrogation [it was found that] he carried a letter which he desired to convey with his own hand into the Royal Presence. On receiving permission to approach, he cried out before the pavilion with a dignity, composure, and respectfulness surpassing description, and in a loud voice, “O King, I have come unto thee from Sheba with a weighty message!” [Cf. Qur’án 27:22]

[The King] commanded to take the letter and arrest the bearer. His Majesty the King wished to act with deliberation and desired to discover the truth, but those who were present before him loosed their tongues in violent reprehension, saying, “This person has shown great presumption and amazing audacity, for he hath without fear or dread brought the letter of him against whom all peoples are angered, of him who is banished to Bulgaria and Sclavonia, into the presence of the King. If so be that he do not instantly suffer a grievous punishment there will be an increase of this great presumption.”

So the ministers of the court signified [that he should suffer] punishment and ordered the torture. As the first torment they applied the chain and rack, saying, “Make known thy other friends that thou mayest be delivered from excruciating punishment, and make thy comrades captive that thou mayest escape from the torment of the chain and the keenness of the sword.” But, torture, brand, and torment him as they might, they saw naught but steadfastness and silence, and found naught but dumb endurance [on his part]. So, when the torture gave no result, they [first] photographed him (the executioners on his left and on his right, and he sitting bound in fetters and chains beneath the sword with perfect meekness and composure), and then slew and destroyed him. This photograph I sent for, and found worthy of contemplation, for he was seated with wonderful humility and strange submissiveness, in utmost resignation.

Now when His Majesty the King had perused certain passages and become cognizant of the contents of the epistle, he was much affected at what had taken place and manifested regret, because his courtiers had acted hastily and put into execution a severe punishment. It is even related that he said thrice, “Doth anyone punish [one who is but] the channel of correspondence?”

Then the Royal Command was issued that their Reverences the learned doctors and honorable and accomplished divines should write a reply to that epistle. But when the most expert doctors of the capital became aware of the contents of the letter they ordained: “That this person, without regarding [the fact] that he is at variance with the Perspicuous Religion, is a meddler with custom and creed, and a troubler of kings and emperors. Therefore to eradicate, subdue, repress, and repel [this sect] is one of the requirements of the Well-established Path, and indeed the chief of obligations.”

This answer was not approved before the [Royal] Presence, for the contents of this epistle had no obvious discordance with the Law or with reason, and did not meddle with political or administrative matters, nor interfere with or attack the Throne of Sovereignty. They ought, therefore, to have discussed the real points at issue, and to have written clearly and explicitly such an answer as would have caused the disappearance of doubts and the solution of difficulties, and would have become a fulcrum for discussion to all.
- ‘Abdu’l-Baha  (‘A Traveler’s Narrative’)