1955: Very intense and widespread persecution against the Baha’is in Iran 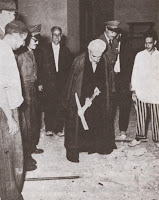 It was in April and May of 1955, during the month of Ramadan, the Muslim month of fasting, that the popular preacher Shaykh Muhammad-Taqi, known as Falsafi, began to preach against the Baha'is in a Tihran mosque. These speeches were broadcast nationally by the Government radio and became more fierce and vituperative each day. Throughout the entire country, the passions of the rabble were aroused and further fanned by local religious leaders. The police and the army took over the National Baha’i headquarters in Tihran and destroyed the dome of the building. On 17 May, the Minister of the Interior announced in Parliament that the Government had issued orders for the suppression of the 'Baha'i sect'. Thus the effects of the inflammatory words of the religious leaders compounded by the encouragement given by the Government precipitated an avalanche of persecution: Baha'i holy places were occupied and ransacked, homes and farms looted and burned, Baha'i cemeteries desecrated; adults were beaten, young women abducted and forced to marry Muslims, children expelled from schools, and many dismissed from their employment. Throughout the whole of that summer, the persecutions continued across the entire country. Not only was it entirely unchecked by the Government or police, but, in many areas, it was Government officials who instigated and led the attack on the Baha'is.

- Moojan Momen  (Forward to ‘The Seven Martyrs of Hurmuzak’, by Muhammad Labib, translated by Moojan Momen)