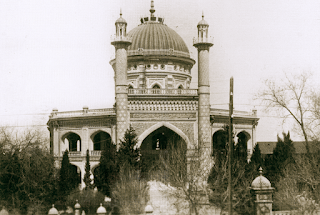 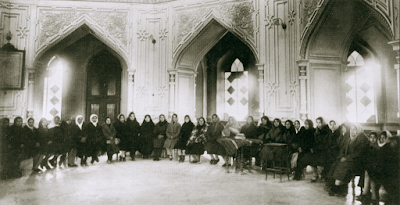 A women's meeting shows the interior design of the Ashgabat Temple. The women and girls would take turns reading or chanting prayers. 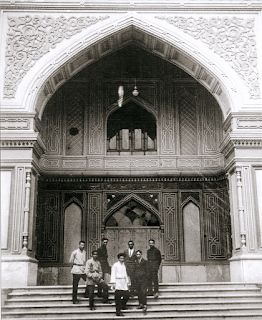 The front arch of the Ashgabat House of Worship
Construction began in October 1902 and was mostly completed by 1906, with the ornamentation finished in 1919. Its dependencies included a travelers' hospice; a school for boys, another for girls; two kindergartens; medical dispensary; library; and a public reading room. It served a thriving Baha'i community of 4,000 people.

After the Russian Revolution in 1917, the Baha'is were mostly left alone. In 1928, the government confiscated the building, took over the schools, and allowed the community to use the property until 1936. By then, the Baha'is were subjected to attacks and arrests, and in 1938, the entire community was forcibly dismantled with most of the members deported, imprisoned, or exiled. The building was closed to the Baha'is and turned into a museum. In 1948, an earthquake damaged the complex, and in the 1960s, it was demolished; the site was later turned into a public park. After the fall of the Soviet Union in 1989, Baha'is returned to Ashgabat and found believers still resident in the city.
(‘Images of American Baha’i Temple’, by Candace Moore Hill)