Green Acre in Eliot, Main, USA becomes one of the first Baha’i summer schools in the Western Hemisphere

Sanctified by a native peace pipe ceremony in 1894, the Sarah Farmer Inn, near the banks of the Piscataqua river in Eliot, Maine, became a conference facility for a variety of courses, including transcendentalism, evolution and comparative religion. Its open-minded atmosphere attracted people of many religions, cultures, and races. It provided a peaceful setting for fostering fellowship, understanding and unity. 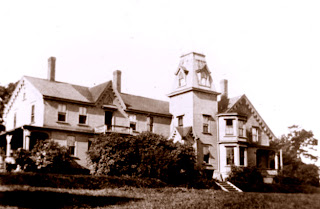 After her pilgrimage to ‘Akka in 1900, Sarah Farmer, made the facilities at the disposal of the followers of the Faith which she had herself recently embraced. The center attracted many Baha’i speakers including some very famous like, Mirza Abu’l-Fadl in 1902. In 1912 Green Acre became specially blessed by the footsteps of 'Abdu'l-Bahá Who spent a week there and gave a number of talks. In one of them on August 17 He indicated that “In the future, God willing, Green Acre shall become a great center, the cause of the unity of the world of humanity, the cause of uniting hearts and binding together the East and the West. This is my hope. (Abdu'l-Baha, The Promulgation of Universal Peace, p. 264). It is reported that ‘Abdu’l-Baha further indicated that one day Green Acre would become the site of the first Baha'i University and the second Baha'i Temple in the United States. The room in which ‘Abdu’l-Baha stayed is reserved nowadays for prayers and meditation.

Green Acre was the site of America’s earliest conferences on racial unity. It was also at Green Acre that the first election of the National Spiritual Assembly of the Baha'is of the United States and Canada took place. On 12 August 1929, the NSA of US and Canada obtained legal title to the property. Green became the site for the first office of the National Spiritual Assembly and the residence of its secretary, Horace Holley.

Today Green Acre thrives as a year round Baha'i School drawing people from all around New England, The United States and Canada, and the world. The Sarah Farmer Inn has been restored and renovated to accommodate guests. Extensive work on other parts of the property have resulted in the creation of a beautiful place to visit and learn about the Baha'i Faith including a fully functional Baha'i bookstore. Picnics and concerts are often held on the grounds bringing many people to Green Acre for a pleasant day or two of rest and fellowship.”
(Adapted from ‘Intro to the History of the Green Acre Baha'i School in Eliot, Maine’; online resources at http://bahai-library.com/essays/greenacre.html; Shoghi Effendi, God Passes By, pp. 261& 288; A Concise Encyclopedia of the Baha’i Faith by Peter Smith;, and A Basic Baha’i Chronology, by Glenn Cameron and Wendi Momen) (You can view pictures of 'Abdu'l-Baha at Green Acre at 'Abdu'l-Baha Visists the West)