The eleven-month contest at Fort Tabarsi 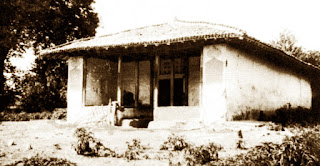 The audacity of Mullá Husayn who, at the command of the Báb, had attired his head with the green turban worn and sent to him by his Master, who had hoisted the Black Standard, the unfurling of which would, according to the Prophet Muhammad, herald the advent of the vicegerent of God on earth, and who, mounted on his steed, was marching at the head of two hundred and two of his fellow-disciples to meet and lend his assistance to Quddús in the Jazíriy-i-Khadrá (Verdant Isle)—his audacity was the signal for a clash the reverberations of which were to resound throughout the entire country. The contest lasted no less than eleven months. Its theatre was for the most part the forest of Mázindarán. Its heroes were the flower of the Báb’s disciples. Its martyrs comprised no less than half of the Letters of the Living, not excluding Quddús and Mullá Husayn, respectively the last and the first of these Letters.