1868: Siyah-Chal (the Black Pit) was filled-in and a center for royal mourning for Imam Husayn was built over it. 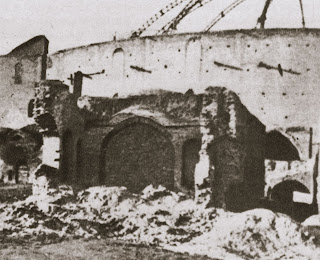 Siyah-Chall’s original corridor leading to the entrance. The dungeon was filled-in in 1868 and the Takyih Dowlat, a canvas-covered center for royal mourning for Imam Husayn, was built over it. (Baha’i News, March 1976) 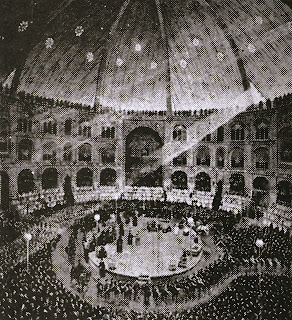 A reproduction of a painting of the Takyih Dowlat showing a ceremony for Imam Husayn. The ground floor accommodated 4,000 women. The surrounding rooms were for the Shah, his family, and dignitaries. (Baha’i News, March 1976)

The site [Takyih Dowlat] was used in 1925 for a convocation of national representatives (Majlis-i-Mu’assisan) at which the fall of the Qajar dynasty was announced. The officers of that historic gathering are shown in this photo. A Baha'i, 'Izzatu'llah Bakhshayish, shown fifth from left in front row, was the chief stenographer recording the event. Thus the downfall of the Qajar dynasty was announced through the will of the promised Husayn (Baha'u'llah) at the very site of His prison. It was known among the believers at the time that the Exalted Báb had predicted that the Qajar dynasty would fall 1,000 (lunar) months from time of His Revelation. However, research must be made to find the source.
(Baha’i News, March 1976)