French historian A. L. M. Nicolas comments on the condition of Persia at the time of the appearance of the Báb and the gradual unfoldment of His Divine Mission 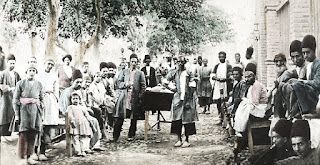 Everyone agrees in acknowledging that it would be absolutely impossible for him to proclaim loudly his doctrine or to spread it among men. He had to act as does a physician to children, who must disguise a bitter medicine in a sweet coating in order to win over his young patients. The people in the midst of whom he appeared were, and still are, alas, more fanatical than the Jews were at the time of Jesus, when the majesty of Roman peace was no longer there to put a stop to the furious excesses of religious madness of an over-excited people. Therefore, if Christ, in spite of the relative calm of the surroundings in which He preached, thought it necessary to employ the parable, Siyyid ‘Alí-Muḥammad, [the Báb] a fortiori, was obliged to disguise his thought in numerous circuitous ways and only pour out, one drop at a time, the filter of his divine truths. He brings up his child, Humanity; he guides it, endeavoring always not to frighten it and directs its first steps on a path which leads it slowly but surely, so that, as soon as it can proceed alone, it reaches the goal pre-ordained for it from all eternity.
- A. L. M. Nicolas  (Introduction to volume I of “Le Bayán Persan” (pp. 3–5); inserted footnote by Shoghi Effendi in ‘The Dawn-Breakers’)