circa 1869: The first Bahá'í from the outside world to be able to meet Bahá'u'lláh in 'Akká 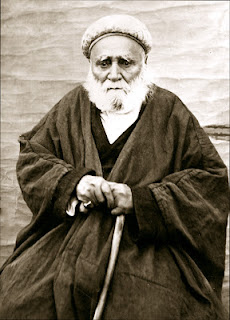 Hand of the Cause Mulla Abu'l-Hasan-i-Ardikani, surnamed Amin, Apostle of Baha'u'llah, the Trustee of Huququ'lláh

Mulla Abu'l-Hasan-i-Ardikani, who is known as Haji Amin or Amin-i-Ilahi (Trusted of God), was born in about the year AH 1232 (AD 21 November 1816 -- 10 November 1817) in Ardikan, a small town near Yazd. At seventeen years of age he married into a family of Bábís of the town. He was persuaded to investigate the new religion and eventually, shortly after the martyrdom of the Báb, he declared his belief. When news of the Declaration of Bahá'u'lláh came, he accepted immediately and travelled throughout Iran meeting other Bábís and teaching them of the advent of Bahá'u'lláh. After a time he became the assistant of Haji Shah-Muhammad Manshadi, Aminu'l-Bayan, who was the Trustee of the Huququ'lláh.[1] He would travel about the country, earning his living by trading and also by acting as a writer for those who could not write. At the same time he collected the Huququ'lláh and any letters that the believers wished to forward to Bahá'u'lláh, and also distributed Tablets of Bahá'u'lláh when these were received. He came to 'Akká while Bahá'u'lláh was still imprisoned in the citadel and succeeded in establishing contact with the exiles. He was the first Bahá'í from the outside world to be able to meet Bahá'u'lláh in 'Akká (in the Public Baths). He returned to 'Akká on several further occasions. When Haji Shah-Muhammad Manshadi was killed in 1880, Haji Abu'l-Hasan was appointed Trustee (Amin) of the Huququ'lláh. In 1891 he was imprisoned with Haji Akhund for three years in Tihran and Qazvin. In the time of 'Abdu'l-Bahá he continued his travels, visiting 'Akká and Haifa on several occasions. Towards the end of his life he resided in Tihran and Haji Ghulam-Rida, Amin-i-Amin, was appointed his assistant. He died in 1928 and was posthumously named a Hand of the Cause of God by Shoghi Effendi.
– Balyuzi  (‘Eminent Baha’is in the Time of Baha’u’llah’)
[1] The 'Right of God' -- a payment by believers instituted in the Kitáb-i-Aqdas.