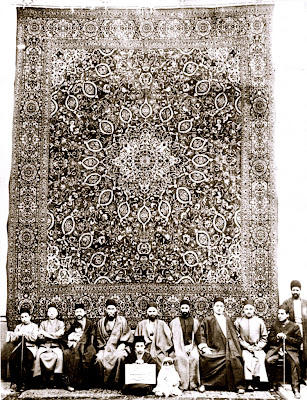 Some members of the famous Ahmadpur family had been in the presence of the beloved Master when the Shrine of the Bab had almost been completed. In their longing to have a share in that great and historic enterprise, they asked the Master if they could make a special carpet for the floor and send it to Haifa. He accepted their request and gave instructions as to what design they should choose for the carpet. This photo was taken after its completion and before its dispatch to the Holy Land. The people sitting in front are from the family of Haji Ahmad, in whose silk factory the Bab's body had been kept after being taken from the edge of the moat outside the city of Tabriz. This rug is now placed in the Shrine of the Bab. (Baha’i News, October 1964)